The story of the G40 began in late 1974 with the introduction of the Audi 50, a front wheel drive 3 door hatchback. A Volkswagen badged version of this car soon followed, based on the same body shell and with an 895cc engine producing 40bhp. The name Polo was chosen and it soon became a very successful model, with examples reaching the UK from February 1976. This initial version (Polo I) was given a minor facelift in 1979 to become the Polo IF. Later that year the first Polo GT model became available in some markets. This had a 60bhp engine and sporting features such as a spoiler, wider tyres, and a rev counter. 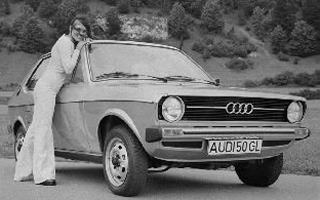 In October 1981 the Polo II (Polo Mk2) took over from the original model. The initial hatchback version of the Mk2 featured a steeply sloping tailgate providing excellent load carrying ability for a car of the size. Within a year a coupe body style was added with a more gently sloping hatch, similar in profile to the original Mk1 Polo. The Polo Coupe was intended as the sporting version; the 1272cc GT Coupe featured a 75bhp (55kW) engine and other modifications such as fog lamps in the grill, and a rear anti-roll bar. It could reach 62mph (100km/h) in around 11.5 seconds.

Unfortunately for the UK market the 75bhp version of the GT Coupe was not available; the top of the range Mk2 Coupe model in the UK developed 55bhp (40kW) from its 1272cc capacity. However it did benefit from front and rear spoilers, stronger drive shafts, 165/70 tyres on 13 x 5.5 rims under wheel arch extensions, rev counter, and special trim. In late 1984 modifications were made across the range including a larger fuel tank and lowered suspension. Other significant changes to the Mk2 occurred a year later with the introduction of electronic ignition and a revised cylinder head employing hydraulic tappets. By then the Coupe had been developed into the desirable Coupe 'S' model, with the additions of fog lamps in the grill, sports seats, and a 5 speed gearbox.

During 1983 the total number of Polos produced reached one million, including the saloon and van versions that had also become available. At around this time the factory had started to experiment with ways of boosting the power of the Polo's small engines. Due to the size of the car a larger engine was not a practical proposition, so instead they decided to use forced induction to provide the necessary performance. Rather than a turbo charger with its problems of turbo lag and excessive heat, a supercharger was chosen. This was an unconventional design referred to by Volkswagen as the G-Lader after the shape of its spiral displacer. Use of a 40mm version of the G-Lader allowed the power of the 1272cc Polo engine to be raised to 115bhp (85kW) and led to the designation G40. 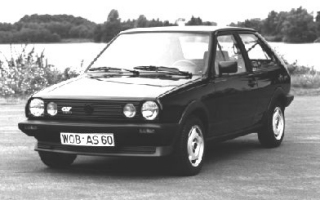 A G40 powered Polo Coupe was first presented at the 1985 Frankfurt Motor Show and was named the Polo GT G40. Shortly after this the factory used the new model to make a successful attempt on two world records in the 1300cc class. However, it was not until early 1987 that a special batch of just 500 of these cars actually became available. It is rumoured that these sold out almost immediately with many being purchased by Volkswagen employees. These vehicles were produced in left hand drive only; the Mk2 G40 was never officially available in the UK although a few have since found owners here.

The next Polo range arrived in late 1990 when the Polo II underwent a facelift to become the Polo IIF (Polo Mk3 in the UK). The most noticeable difference was the change to rectangular headlamps but there were significant changes under the bonnet; fuel injection replaced carburettors allowing the introduction of catalytic convertors across the range. When the Mk3 was first introduced to the UK the GT was the most powerful model producing 75bhp (55kW) from its high compression 1272cc engine and Digifant multi-point injection. This was available in both the hatchback and coupe body styles although the hatchback GT was soon discontinued due to poor sales. The Mk3 Polo was now produced in Spain at the Volkswagen owned Seat factory. The build quality of these Mk3 models is perhaps not quite as good as the German made Mk2, but they are still among the most reliable and rust free small cars around. 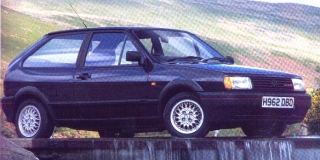 In May 1991, a G40 powered Polo finally arrived to displace the GT as the top Polo model available in the UK. Rather than being a special build like the Mk2 G40, the Mk3 G40 had been designed as an integral part of the Mk3 range. It was based on the GT Coupe model, but with the assistance of the G-Lader and an intercooler, power was boosted to 113bhp (83kW). The slight power reduction compared to the Mk2 G40 was due to the standard fitment of a catalytic convertor on all G40s sold in the UK. A characteristic of forced induction is a very wide spread of torque, which peaked at 111lb ft (150Nm) in the Mk3 G40. This led to an impressive 0 to 60mph time of just 8.1 seconds (1992 VW brochure figure). Other distinguishing features were lowered and stiffened suspension with a rear anti-roll bar, ventilated front brakes, and 175/60 tyres on 13 x 5.5 BBS alloy rims. Red striped bumpers, G40 badges front and rear, special 'Le Mans' interior trim, and a roof mounted 'bee sting' aerial completed the cosmetics.

To assist with publicity for the Polo range in general, Volkswagen introduced a one make race series for the G40 called the G40 Cup. These G40s continue to be raced in the Super Coupe Cup against performance models from Renault, Rover and Honda.

During the life of the UK Market Mk3 G40 there were only minor specification changes; for the 1992 model year clear front indicators and tinted rear lights were included along with a different stereo radio/cassette unit. Various options were available such as front fog lamps and a sunroof, although luxuries like electric windows and central locking were never offered. A single right hand drive example of the special edition 'Genesis' G40 also found its way to the UK.

Only about 500 Mk3 Polo G40s were produced in right hand drive form for sale in the UK. Even then Volkswagen did not find these easy to sell. This was largely due to the high price when compared to better equipped and larger (but much slower!) rivals. When it was first launched in the UK the G40 had a list price of Â£11,568. The price dropped each year until by the final model year of 1994 it had fallen to just under Â£10,000. Many of the G40s from the initial 1991 batch were not sold until one or two years later. A few unregistered examples were even discovered about a year ago!

The Polo III (Polo Mk4) began to take over from the Mk3 in late 1994 and the G40 was discontinued. The Mk4 Polo owes more to the Mk2 Volkswagen Golf than the earlier Polos. Much of the bodyshell, mechanics and interior are shared with the Seat Ibiza, both cars being produced in the Seat factory in Spain where the Mk3 G40s were built. The most powerful model was a 1.4 16V but its performance did not match that of the G40, mainly due to its much increased weight. Possibly for marketing reasons the Mk4 Polo was not given the 2.0 8V, 2.0 16V, and more recently 1.8 20V turbo engines enjoyed by the Seat Ibiza. However the Mk4 Polo is becoming increasingly popular as a modified car; several have been fitted with VR6 engines and at least one has been converted to G40 power.

The latest development has been a facelift of the Mk4. The current range includes the most powerful standard production Polo yet, the 1.6 16V GTi model producing 125bhp, with acceleration close to that of the G40. Due to cost and reliability issues it seems unlikely that there will be any future G-Lader powered Polos, so if you are one of the lucky owners, drive carefully!

The production G40 was only ever available from the factory as a coupe although there have been several transplants into the other Polo body styles. This is easily achieved with the Mk3 Polo models as the necessary mounting points for the G40 installation are common to all bodyshells.